Back to Korea, back to work, back to......painting :D and back to being behind on updating this blog - so everything is back to the usual then.
After getting back from Ireland I had about 10 days of Feb left and a load of stuff to get done. Once I got back I decided I really needed to take stick and list out all the stuff I have waiting for paint and staring furiously at me from the shelf and cabinet. Here is said 'list of shame' (incl the stuff I bought while I was on hols)


Oh God - there's a lot! Nowhere near as much as some foilk I know but still.......How does this stuff accumulate so sneakily!!! Bugger! So - no more buying until I've got this lot shifted.....at leas the majority of it. Thanks to Az's monthly targeting thread over on Dakka, it's become easier to set and see monthly goals of what I want to get completed.
I didnt have much time when I got back so Feb's goals were quite small but as 3 of them were 'commissions' for other folk, they were on top of the list.


First up was BC's 2 figs. One, 'Gaunt's Ghosts' lasman. I'd talked to BC about this and said I wanted to 1) make him a sniper and 2) was going to make a little vignette for him of the farmhouse on Aexe Cardinal from the book 'Straight Silver'. This was all built and ready for paint before I left for Ireland so just needed paint once back. I have loved designing, building and painting this from start to finish and am absolutely thrilled with the finsihed work. Was also pretty gutted to have to parcel it up and send it off to its rightful owner. So I made sure to photo the shit out of him before sending him off. So happy with this guy :) The ruined farmhouse is totally scratch built and the vines ggrowing up the outside are actually the roots of one of my (dead) tomato plants dried out! Damn happy :D I will eventually be doing little vignettes for the 5 Gaunt's Ghosts figs that BC gave me.


Second fig for the same peson was a female Commissar fig that they wanted done in naval colours than the usual black-coated Comms. So I went for one of my fav colours, which I usually use as the secondary colour in my AdMech scheme. Think she came out rather well. Not the most handsome of sculpts but a pretty important piece for the owner.


With those two taken care of, it was on to finishing up the other 'commission' from the 'I paint your mini' thread over on Dakka. This one is an Infinity fig and was my first time painting anything from Corvus Belli and will possibly (but probably not) be the last time I bother with anything from that company until they sort out their casting/boxed product process. It's 28mm but feels more like 28mmicro. They cast in metal rather than resin or plastic and usually (see the above Ghost) painting a bit of metal again is quite fun. Metal does have a lovely weighty feel to it. This Infinity cast tho was an utter pain in the nuts. The joins/fits between parts are not slotted particularly well so the joins are going to be weaker than if they had bother to use proper peg and slots. As its such a slight slender fig, pinning is nigh on impossible. The vents were in a few places very hard to differenciate from the actual sculpt. This Chimera fig is a very nice miniature but their casting and how you get the fig really looks so amateurish, especially from what is supposed to be a big game and minitures company. A quick and simple comparision show you what I mean. As a comparison fig, I used the Ghast fig I got in Ireland by Steamforged Games. Both are totally fresh out of the box - no clean up or trimming done on either.

Big fething difference. Anyhow - Finally got her painted up. Tried out using glazing a lot more with her as she is so small and delicate and so is a lot of her detail. Anything more than just glazes would be in danger of obscuring some of her finer detail. And finished piece........


Overall, I'm very happy with how she came out. Her scheme was semi-worked out before I started but did change and adapt somewhat as I went along, especially the metals.


So, with those done - time to get some of my own stuff done. I had and still have I suppose, a couple of figs on my bench that I started but never got around to finishing. So was defintely time to get a lest some of them all finished up.


A little bit of kitbashing/scratch building and the 'Vox Divina' servo skull was born! Simple enough paintjob and I had my entry for Para's Feb painting comp over on Dakka 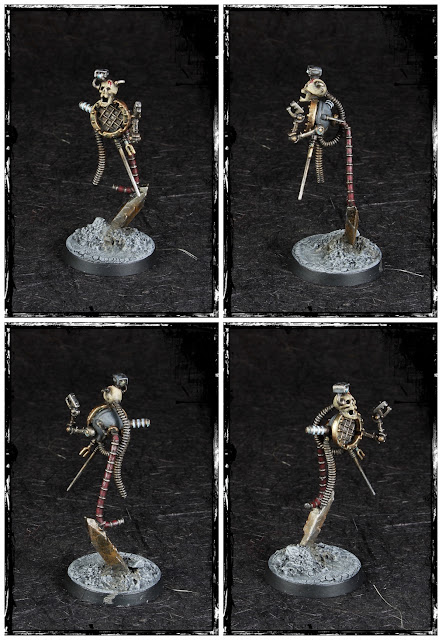 Next up was the first of the Blood Angels' terminators from the Space Hulk box - Sgt. Lorenzo.

His pauldrons are obv more Flesh Tearers than Blood Angels because........reasons! Actually I went with the black pauldrons and a darker richer red for the armour to try and break up the usual BA scheme whcih tbh I really find quite boring. I cut off the weird moulded stand/base that the Space Hulk figs come on and rebased him on one of the bases I ordered for Fenris Games in the UK. Big improvement I think.

Finally (god this is a long post already) I got Vrosh Tattersoul completed. He's been sitting there 90% finished for months, so he's finally done and joined up with the other Chosen in the cabinet


And that bascially was February hobbywise. On a final note of what is already a seriously TL:DR post, I gonna 'quickly' talk about a gorgeous new release.


Now, after failing pathetically in Ireland to stick to my buying freeze of figs .....I'm renewed on that mark and totally committed to a renewed buy freeze until I clear my backlog...........and then what does GW do.......they release bloody Deathwatch:Overkill......you utter shitlords!!!! If you havent seen/heard of GW's latest boxed set/board gmae release....crawl the fuck out from under that rock and have a look. They have finaly decided to redo/rerelease/reincarnate/re-whatever the genestealer cult from way back when and damn but they have seriously not held back on it. No half-assed meh sculpts here. They have brought a fething rocketlauncher to a knife fight on this one. 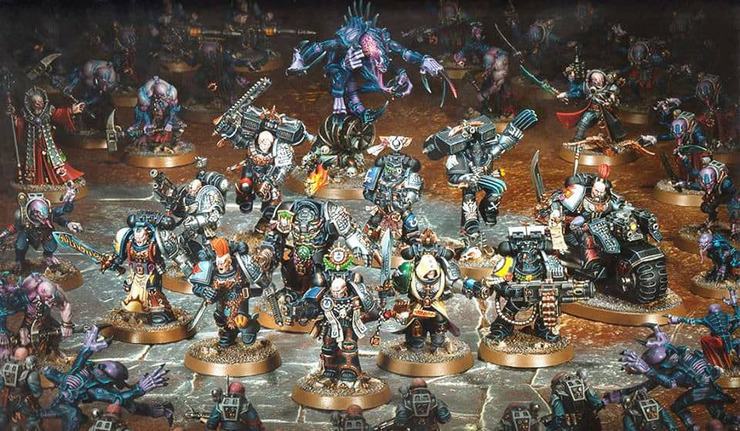 Sculpts are stunning and the game itself look really quite playable. No major gripes from me....one or two possible niggles though. There doesnt seem to be any sort of facing/LoS rules for shooting. On the game board's tiles there are no real hard blind corners or doorways for cover but you do seem to be able to shoot targets directly behind you and striaght through other figs without any sort of penalty. That I really don't like. Houserule #1 is def gonna be made to cut that nonsense out.


The art is glorious overall except for the Deathwatch stat cards. Some genius decided to use the same paictures of the different DW marines from the short stories which are quite possibly the shittiest, ugliest most bollox pieces of art GW have ever used (ok ok....enjoy a touch of hyperbole here) - not onlky are they ghastly but they really don't gel with the style and aesthetic of the rest of the artwork. This however is just my opinion and I'm sure there are folk out there who do really like the portraits.


So niggle #2 is purely subjective and niggle #3 is even more petty!! That fething Space Wolf. Now it's no real secret that I absolutely bloody detest the SWs. Space Marines are cracking. Vikings are awesome too. Space Wolves are not. They're twats. I don't like their fluff, their chartacters, their aesthetic and they totally get on my tits. Having one in the Deathwatch - totally fine with that. Makes no sense to have one of the most prolific chapters NOT contributing. However (if you've also read the short story about) Drenn Redballs is an ever bigger twat than usual. From the first page he comes across and a seriously unlikeable wanker. A complete twat. The scuptors have done a fine job if showing his arseholish character with that bollox mohawk they've given him on the fig. Fluff character being an arse or not - I really don't like that horse-wank of a hairpiece they've given him. I doubt I'll keep it when I 'eventually' pick up a copy of the box. I'll probaly either replace his head with a p̶u̶m̶p̶k̶i̶n̶  a Mk VII helm or if I find one cheaply, one of the SW wolf helms - we'll see. Having ol Redballs wearing a helm though does go directly against the fluff as it says he refuses to wear one......but as the fluff character is a complete arsetard......I'm quite happy to break fluff this time. Again folks, don't take my anti-SW ranting too seriously (read: at all) - I just really can't stand them - I'm sure there are some nice SWs out there (n̶o̶,̶ ̶n̶o̶ ̶t̶h̶e̶r̶e̶ ̶a̶r̶e̶n̶'̶t̶;̶ ̶a̶r̶s̶e̶h̶o̶l̶e̶s̶ ̶o̶n̶e̶ ̶a̶n̶d̶ ̶a̶l̶l̶!̶!̶!̶ ) Anyways - those 2 petty niggles and that one LoS rule worry aside......this could very well be one of GWs best boxed games releases at least since Space Hulk. Is it better than BaC?......hmmm - I'm not really in any position to say. BaC doesn't really appeal to me as it's 30K and I've really got no interest in starting 30K. I would say on a sculpt level, the DW:O are better and more detailed. Gamewise......as I say, I can't really comment. Anyhow...that's your lot for today folks. Sorry for the length but I'm a bit behind the now and that.