Suffer Not The Alien To Live


It's been a busy busy September but painting has still gone on regardless! With DeathWatch:Overkill & then later on Death Masque - GW has been busy ensuring that I never run out of stuff to paint! Or that I never actually clear my backlog >< On that note - GW of late have really turned around. The 'new', shall we calle it 'attitude' has been fantastic and done much to quieten if not shutup many of the whiners. All the new social media presence and a more open and communicative ethos seems to be serving them well and making things much better for all. Anyways that subject is a topic for another post and has already been done on numerous different boards and forums and blogs across the web.
So, August and September.....some stuff done, lots of stuff yet to be done and new plans beginning to take shape. Forayed into some of the DW:O marines to see how they are and damn but those are some gorgeous figs. I bought a load of resin bases for them and for the 'stealer half of the boxed set to match the setting - underground industrial mining complex. The bases are from Micro Art Studio and after searching a load of different companies for tech styled bases, these are, imho, the absolute cream. They do a ridiculous number of different themed bases not just the tech ones and are worth a look. Anyhow, got a few of the DW done and made wee collages for each one - see what y'think -

Have also continued to press on with trying to get Space Hulk finished as well. The termies are just about all done now barring the Librarian which should follow in short order. Which is just as well as Ben aka TP-DC and I have started playing the 4th ed missions over FaceTime every second weekend or so. Love the technology - from Wales to Korea, the game goes on. Expect a batrep of the first couple of missions up soon :) 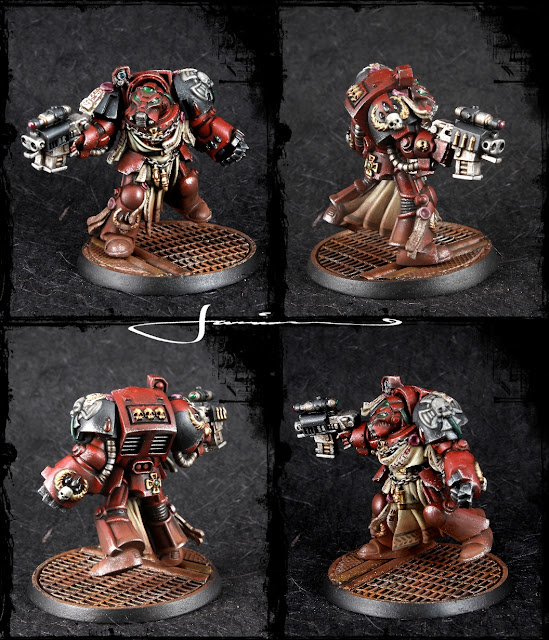 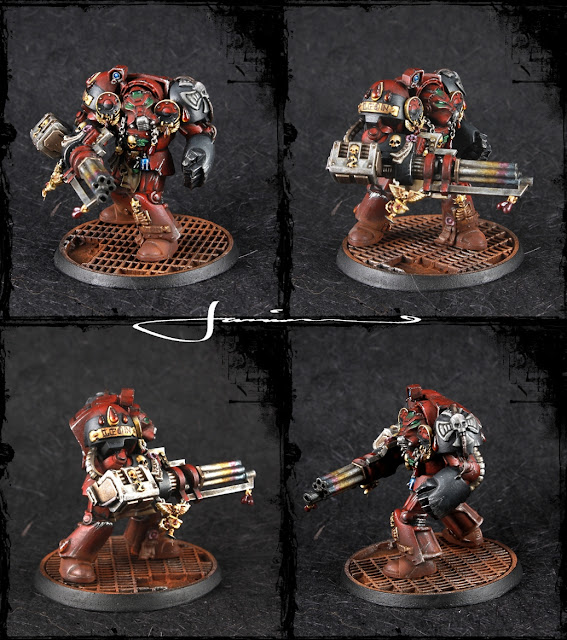 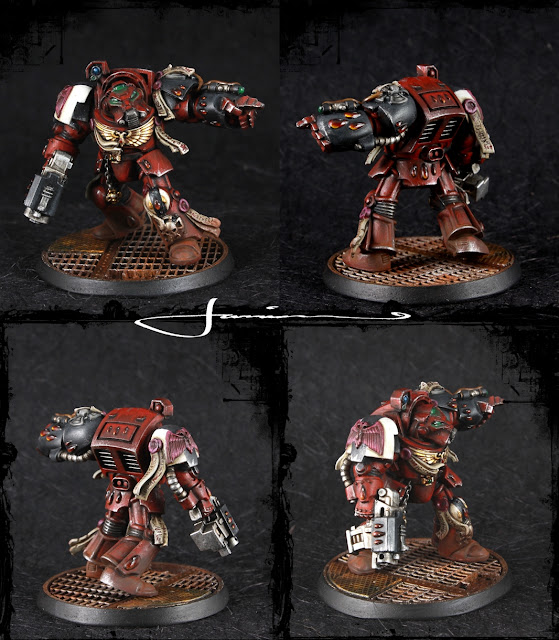 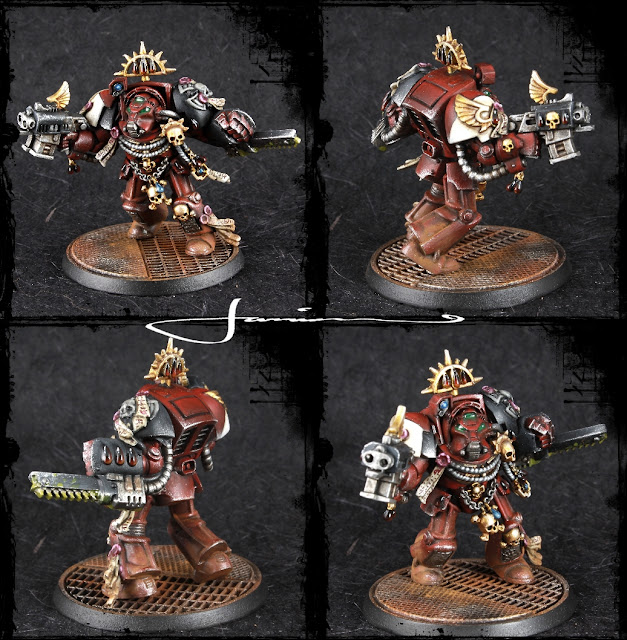 The other bit of painting to note, which I'm now quite sorry I didn't do here as an ongoing WiP, was the painting of the new Eldrad Ulthuan sculpt from the Death Masque box. Had a lot of fun with this one and tried out a few new things on him. I like the 'official' paintjob but I wanted to change it a little to my own idea of him. He is old, oh so very old - old enough to have been around during the Horus Heresey old. So I wanted to tone down his colouring a bit and make it less bright and fresh. Not dull per se but just a little less saturated. The spiritstones he wears for example are not as blingy as the ones you usually see on the eldar to give the idea that they have come from eldar now very long since dead. His cloak was the scariest part to paint as a starfield done badly looks like an utter shitmess so that was something I needed to really think about and plan out. I did a couple of runthroughs on plastic primed icecream spoons to make sure I was going in the right direction. Romain from BoW and Ben Komets on painting buddha both have done very good tutorials using slightly different methods to get the effect. I ended up going with a wet-in-wet approach and then several glaze layers and filters to get the effect. Really happy how it came out.
The snow was another thing that I've never attempted before and there are a load of tutorials out there on how to do it. A lot of them, I felt, end up with an effect that looks more like solid hard chirstmas cake icing, so a bit of fiddling and experimentation later and I settled on a mix of baking soda, ceramite white paint and my go to matt varnish as a carrier. Happy how it turned out. Actually I damned well delighted with how Eldrad turned out - lol. Couple more bigger pics for ye - 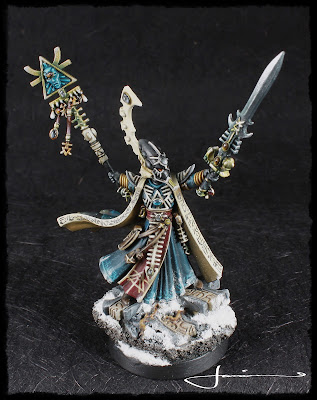 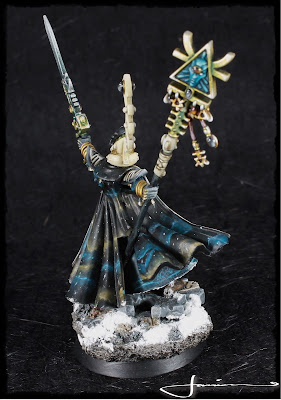 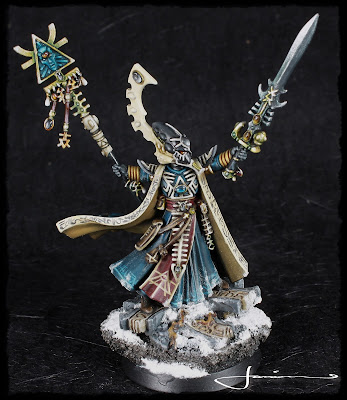 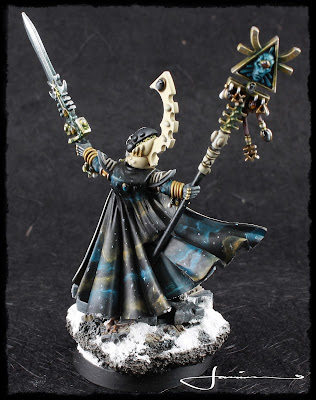 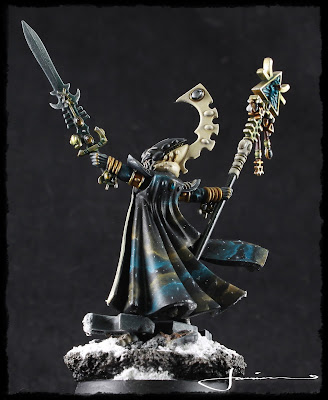 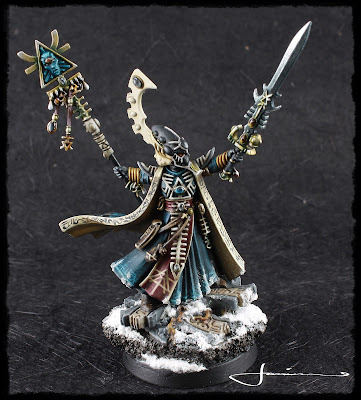 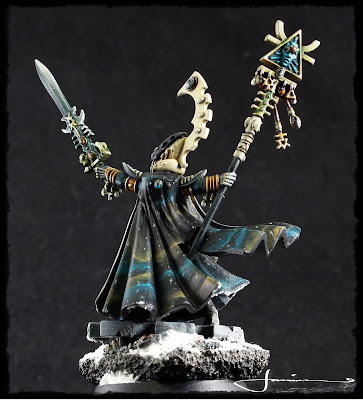 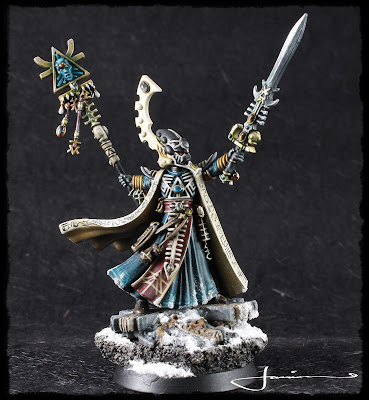 Well that's a lot of photos and I think quite enough out of me!! C&C always welcome as per usual. Any questions - just drop me a comment and I'll see what I can do